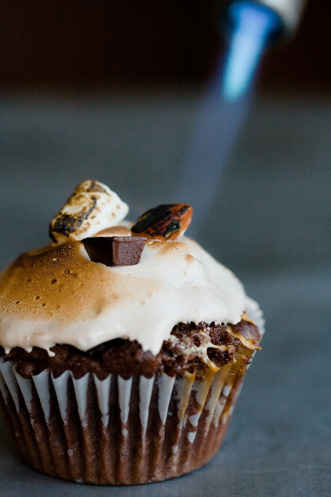 Beat butter and 1 1/3 cup sugar in a large bowl until light and fluffy. Beat in eggs, sour cream, vanilla and milk until blended. Mix dry ingredients into wet ingredients until just combined. Fold in marshmallows, chocolate chips and almonds.

Fill cupcake liners 3/4 full. Bake for 25 minutes or until a toothpick comes out dry.

Spoon Chocolate Meringue Frosting onto cupcakes.Top each cupcake with an almond, marshmallow, and piece of chocolate.

Toast the meringue and marshmallow using a culinary torch or placing under your oven broiler for just a quick second. Make sure to not walk away as these will toast fast.

Combine the egg whites and 1/2 cup sugar in the mixing bowl of a stand mixer.

Set mixing bowl on top of a pot of boiling water. Whisk until sugar has reached 110º on a candy thermometer. Remove mixing bowl from the pot and place on mixer.

Whisk for 10 minutes on medium speed using the whisk attachment. Whisk on high speed for another five minutes (you should see stiff glossy peaks). Whisk in 2 teaspoons cocoa powder until just integrated. 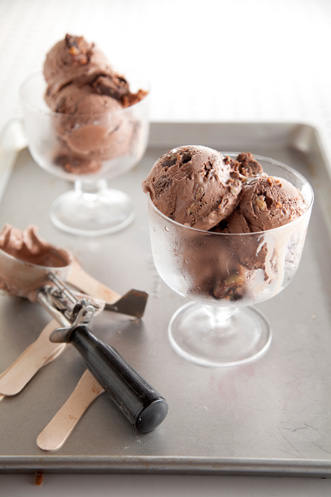